Each year Indian Hills alumnus Tom Arnold awards two scholarships to Indian Hills students. The scholarships award tuition, fees, required books, and required supply costs for one year (three terms). In addition, if the winners are students residing in the dormitories, an average of room and board costs will be included as part of the scholarship award. 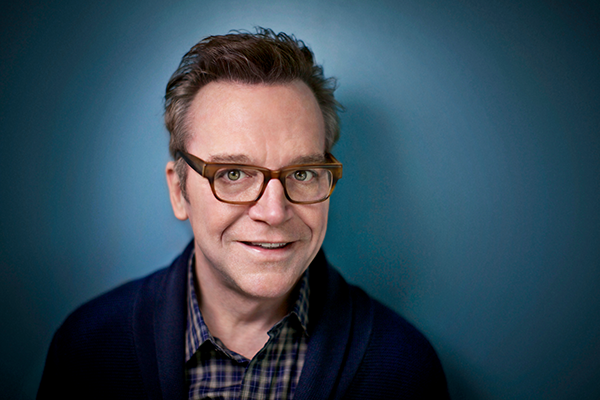 To be eligible a student must compose a brief essay (500-1000 words) based on the theme given by Tom.

"Tell me a story about a time when you helped a stranger in need, why you did it, how it made you feel & what you learned from the experience that might affect the rest of your life."

The 2018-19 Scholarship Winners are Jennifer Ruby and Jesse Price. See below to read their winning essays.

When I was 15 years old, I met someone in my life who was mentally sick. They’ve asked that I keep their name out of this essay though, but she has become a truly good friend of mine despite having moved away. She was an out of control self-harmer, had no friends, and was sad. Very sad. I had never encountered something like that before. I met her on the day she planned to kill herself and no one knew it. It was a sadness I knew well. I had never spoke to her before, nor had I ever seen her in the hallways. On that day, though, I knew something was wrong.

I ran into her in the hallway, and when I looked in her eyes, I saw the apology. For running into each other, and the apology for the storm that was coming. I knew that, I saw that. I put my hand on her shoulder and I told her.

“Hey, come sit with me at lunch. Ok? You’re always welcome,” before I walked away. During lunch, I gave her my phone number because I could tell that she still wasn’t well. The cuts on her arms were screams for help, like my dad always told me. I was someone who knew cutting well and I knew the eyes of someone who was going to commit suicide. After school, I received a text from her asking me whether she was worth living and breathing. I told her that we should meet up and talk so we scheduled to meet up later that night at the wooden park. We sat on a swing and I told her my story of my own battle. There were tears in her eyes before she told me that she’d been bullied all her life. She hated her complexion, hated herself, and so many
other things I promised I would never tell anyone. I apologized for not noticing and I held her hand. I remember telling her that suicide wasn’t worth it. You end up regretting it as soon as it happens, and when you’re at rock bottom, there’s only one way to go. She asked me what that was and I said up. I promised her that I’d be there for her whenever she needed someone ever again.

A year later, she moved away but she was alive and she was getting better. Her self-harm had stopped and she was getting professional help whilst also being on medicine. However, she told me once that if I hadn’t intervened, she would have killed herself on that specific day.

It made me realize how frail human brains can be and how beautiful life was. From that day on, I saw it as my mission to be there for the people who need it. My Facebook is always open for anyone needing help. I felt like I did something right for once, like I was important in this world. That was the feeling that I would never give up because it made my day and gave me purpose. I realized that I would become an activist for self-harm to help people understand what exactly goes on inside someone’s mind. Helping that girl, my friend, made me realize that everyone needs someone to get through tough times. I wanted to be that person, and I wanted to help people. Somewhere in my future, I will achieve that dream and help as many people as I can. Whether it be opening up a therapy farm for kids who’ve been through trauma, or just
finding people who need someone and being there for them. That’s the only way my experiences
will benefit someone else.

I started to write the characters in my books with more damage to them, with more pain
so people like me and her could connect with them better. I gave my characters the same dreams
as those who are like us; To survive.

I live in the small town of Albia, Iowa, and one day I was on my way to Ottumwa driving East on Highway 34 to pick up my daughter. It was blazing hot outside, I think it was in the middle of August, and the traffic was usual for midday. I wait at the four-way stop, and then proceed on my way. As I came closer to ther outer edge of town I spotted a little old man walking down the highway. This man looked to be in his nineties, and he had to use a walker to get around. He had on an old flannel shirt, wrangler jeans with suspenders, and a pair of worn down tennis shoes. He looked uterly lost and confused, just wandering down a side street, about to cross onto the busy highway.

As I sit and think of this old man, I begin to remember all the people that have gotten lost or wander away from their home, this man didn't exactly look like he knew where he was headed. I decided to turn my car around an pull up next to him. By this time he had made it all the way to the stop sign at the end of the road, just about to cross the highway. I stop, roll down my window and ask him where he is headed. The man looks at me, bearing a confused look on his face, and asks me to speak up. I get out of my car and head over to him to introduce myself. I didn't want to scare him, so I stopped and told him my name, and asked if he needed help. At first he said no, he was just out looking for something but couldn't remember what. The man introduces himself to me, for privacy reasons we will go with L and calls me Sonny. He begins to ramble on, a bit incoherently, about the odds and ends of his life.

At this point it  becomes increasingly clearer to me that this man should not be out here alone, and that someone was probably missing their husband or father. I was worried about him, but did not want to freak him out. L looked like he was getting hot, so I asked him if he would like to go have some lemonade at the restaurant just behind us. His face lit up, and L said he just wanted some coffee. I direct him to turn around, and we walk slowly to the Highway (the restaurant I mentioned).

As soon as you walk into the restaurant there is a counter where you check out, and just behind it there is a case with homemade pie by the slice. L says he would like to have pie and coffee, and to sit down because he is very tired. I order him a piece of lemon meringue pie and coffee, and I have an iced tea. We make our way to the table, and sit down. L has a hard time getting situated, so I help him sit down. As we are waiting for the pie and drinks, I began to try to piece together where this man was from. I thought it had to be near, and asked him about home. L says he has a beautiful home with his wife, but that she got sick and isn't there anymore. I tell him that's too bad, and ask if they had any children. He said no, they always wanted to, but weren't able. I ask L if his home is around here and he says no. L also immediately says that he has been staying in a room with a roommate since his wife got sick. That sentence stopped me in my tracks and I looked at the man a little closer... He had an orange tag on his walker with his last name, and there was just something I couldn't place about him. I ask him if he is stayin at the building just down the road a few blocks, and he says he thinks so, but is unsure of how to return.

The building that I was referring to was one of the local nursing homes. I began to suspect that this man had wandered off. I told L that I could help him, and I would call them for him. I looked up the number, and called the home. I asked to speak with a head nurse, and asked them if they were missing an elderly man. The nurse sounded a bit confused, so I explained the situation to her. She then places me on hold so she can go check on things. She gets on the phone, this time sounding more alarmed, and states that one of their patients in missing, and that there is a nurse on her way to me. The woman thanks me profusely, and requests to stay on the line until her co-worker arrives. When the other woman arrived, and approached L, his face lit up! He was so happy to see a familiar face. She got him home without incident.

I was very relieved that the man was safe, and so happy that I took the time out of my day to do a little extra. I think of what could have become of this man had I not stopped. It was nearly 100 degrees, and he was about to cross a busy highway, very slowly. I just thought of my grandparents, and being kind in general. We need more kind humans in this world. People need to change the way they think. So many people were just passing this man by. I take away with me a sense of accomplishment, and just an overall sense of feeling good. I will always look for that, one person who stands out that may need help, and not know how to ask for it.