Indian Hills is trying to make it easier for high school students who are taking college courses to finish their Associate of Arts and Associate of Applied Science degrees.  The college has announced a new Connect 2 College scholarship that is available to IHCC concurrent enrollment and career academy students who want to continue their academic studies with Indian Hills.

The $600 award can be applied toward tuition, books and fees and will be divided evenly between the student’s first three terms.

“We are excited to offer the Connect 2 College scholarship to area high school students,” says IHCC Vice President Dr. Matt Thompson.  “Within our ten-county region, there is a significant need for a skilled workforce. We hope this scholarship encourages students to pursue and complete a college degree they actually started working on while they were in high school.”

Dr. Thompson added that the scholarship “can be added to any other scholarship(s) a student might be eligible to receive.”  He says that the new scholarship offering will be effective for the 2018 Fall Term.

To qualify for the Connect 2 College scholarship a student must have graduated from high school and be attending IHCC immediately following high school graduation, have an overall minimum grade point average of 2.0 in Indian Hills concurrent enrollment courses, maintain a 2.0 cumulative GPA while enrolled at IHCC, and complete a scholarship application.

More information on the new IHCC scholarship can be obtained by contacting Cammie Richards at 641-683-5277.

Students can apply for the scholarship at www.indianhills.edu/scholarships.

Check Out Art By IHCC Students

The annual Indian Hills Student Art Exhibition is now open and will be on display until Thursday, May 10.

Indian Hills students have created the art work featured in the exhibit during the 2017-2018 academic year.  A wide array of media, both traditional and non-traditional, from ceramic sculptures to watercolor painting, will be displayed.  The Indian Hills art instructors are Mark McWhorter and Lisa Fritz.

With their second major performance of the year now completed, Indian Hills Performing Arts students received awards at the annual Cake on an Empty Stage ceremony held in St. John Auditorium.  The event takes place every spring and celebrates the accomplishments of Indian Hills students who participated in theatrical productions during the academic year.  The performances for this year were Peter and the Starcatcher in December 2017 and Taming of the Shrew in April 2018.

Receiving the award for Best Performance in Peter and the Starcatcher was Hannah Haring (Cambria) who played Peter, and Best Supporting Role went to Bianca Cardona (Keota) who performed Stache.

Receiving an award for Best Performance in Taming of the Shrew was Brittanee Leege (Ottumwa) who performed Katherine, and Best Supporting Role went to Demitrius Mitchell (Harvey, IL) who played Lucentio.

Thirty-seven Indian Hills students received Star Performer medals for their performance in or technical support of the two productions.  They include (listed by hometown): 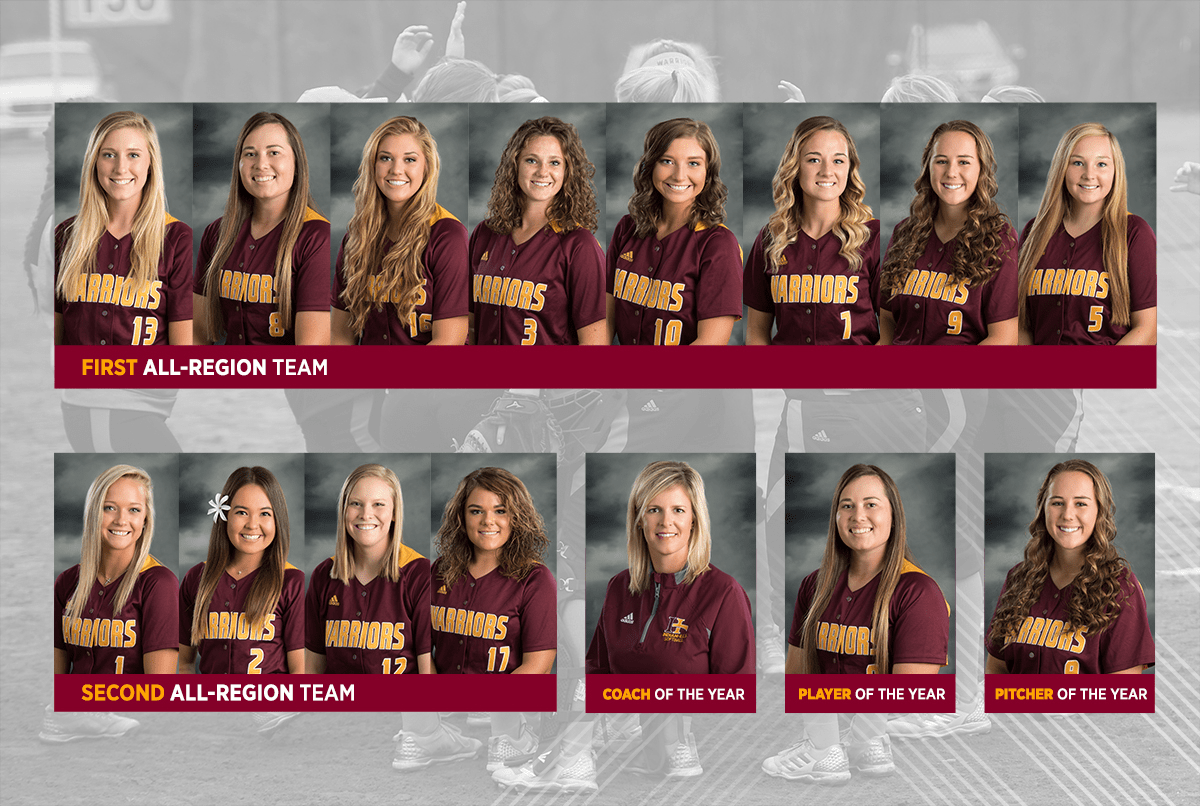 Regular-season and postseason Region XI champion Indian Hills placed eight players on the all-region first team and four more on the second team in awards announced by the league office.  In addition, IHCC coach Laura North repeated as the Region XI Coach of the Year.

Kuba, who leads the Warriors in seven offensive categories, earned the Player of the Year honor, and Stanley, with a 13-2 pitching record, is the Region XI Pitcher of the Year.

Of the dozen IHCC players on the all-region squads, there are seven sophomores and five freshmen.

Five of the Warriors honorees made their second all-region team.  Goodale, Takushi and Smith were first-team picks in 2017 and Kuba and Jones were placed on the second team last year.

Indian Hills will take a 46-10 season record into the district tournament this weekend in Poplar Bluff, Mo. against Three Rivers CC with a goal of qualifying for the program's third straight trip to the NJCAA national tourney. 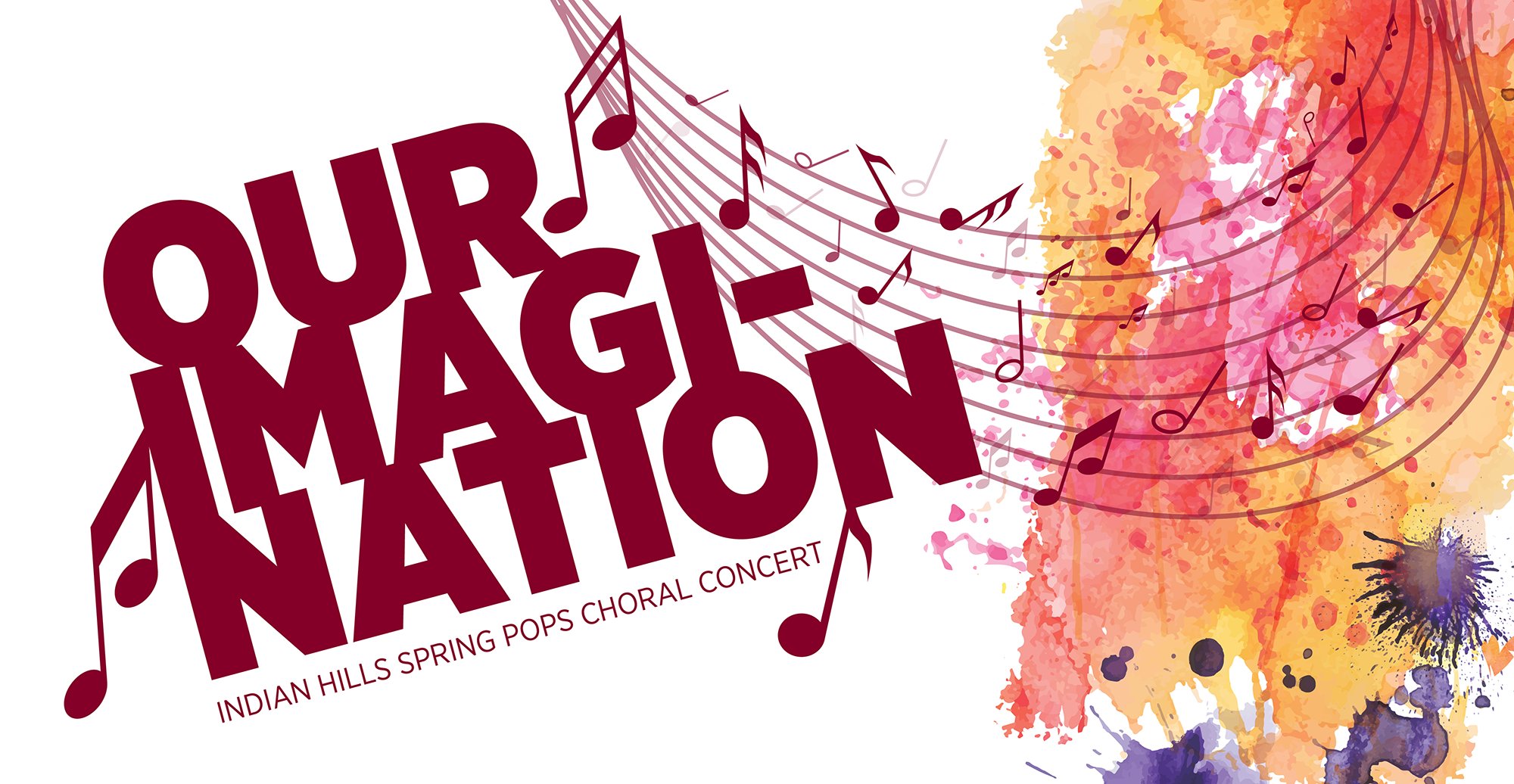 The Indian Hills Community College choral department will wrap up a year’s full of performances with the Spring Pops Concert this Sunday, May 6.  The show will begin at 3:00 p.m. in St. John Auditorium on the IHCC Ottumwa campus and admission is free.

The concert will feature all of the Indian Hills choral groups and soloists performing songs around the theme “our imagination.”  Some of the selections performed will be Pure Imagination, Leonard Cohen’s Hallelujah, If I Didn’t Have You from Monsters, Inc., This is Me from the Greatest Showman, Bohemian Rhapsody, Build Me Up Buttercup, Let it Be, and many more.

The public is invited to join the students for an afternoon of energetic fun and celebrate the end-of-year concert with the choral and vocal students from IHCC. 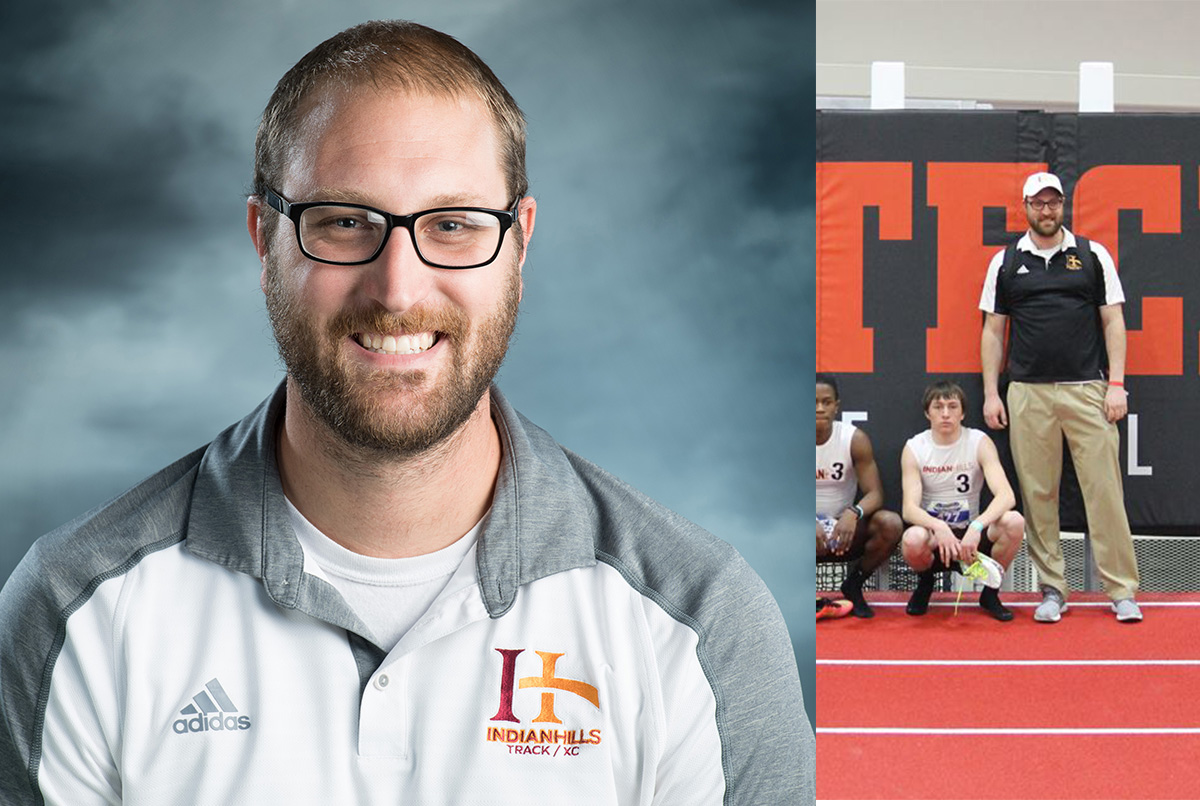 Scott Barnes, the Indian Hills head cross country and track and field coach for the past four years, is leaving to take a position as head coach of the two sports at Briar Cliff University in Sioux City, Iowa.  Barnes will coach the Warriors through the end of the current track and field season, which will conclude at the NJCAA outdoor championships May 17-19.

Barnes was responsible for starting the track and field programs, both indoor and outdoor, at Indian Hills and has led the men's and women's teams to great success.  The IHCC men's team has been ranked in the national top 25 and will have performers in a number of events at this month's national meet.  The men's cross country team was also nationally rated during Barnes' stint at Indian Hills.

IHCC was his first job as a college head coach.  Barnes had been the head coach at Beal City HS in Michigan and arrived at Indian Hills after one year as the assistant cross country coach at Muskegon CC in his hometown in Michigan.

Barnes said leaving Indian Hills will be tough.  "In the last four years what started out as just a cross country coaching job has developed into the coach of nationally-ranked track and cross country programs," Barnes stated.  "I owe a ton of that success to my assistant Brent Ewing.  Brent has been an absolute blessing from the start.  Without him we wouldn't be where we are today.  Getting a chance to start a program from scratch is hands-down the most rewarding thing to be a part of in my athletic life.  The support I have been given from the administration, school and community has been second to none.  So much of my life has been established in this place.  From getting married to buying my first house and now having a child on the way, the Indian Hills family got me through all these transitional periods and I owe nothing but thanks to this place."

The IHCC coach says he's proud of what has been established at Indian Hills in such a short period of time.  He believes the two programs will continue to flourish and grow because of the influences of the people who work at the college.  "I'd like to thank Dr. Marlene Sprouse, Dr. Matt Thompson, Dr. Chris Bowser and my mentor through this journey, Athletic Director Dr. Brett Monaghan," Barnes said.  "I thank them not only for their amazing guidance in my professional life, but also for their mentorship and advice they have given me in my personal life as well.  There's a reason why this place is successful in everything it does and that unmistakably is because of the rich and caring experience from our leaders."

A search will begin immediately to find Barnes's successor, according to Monaghan.