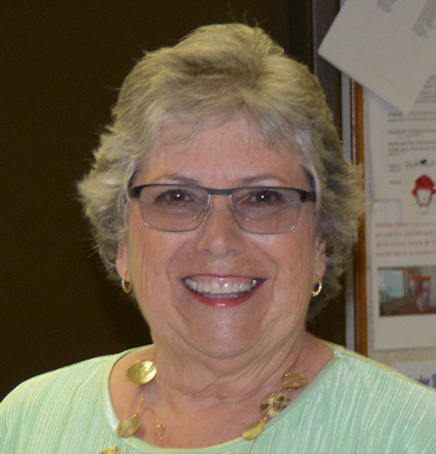 1. When did you work at Indian Hills?

2. In what departments did you work and what jobs did you have?

I was the Athletic Secretary in the Athletic Department during my time at The Hills. My job was in the Hellyer Student Life Center. I was the secretary for the Athletic Director as well as all of the coaches on the Ottumwa campus. Some of my many jobs involved sending contracts to opponents as well as officials/umpires. I also attended all home games and took or sold tickets at many of the events. At times I helped with scorekeeping and kept the official book for softball. I also announced at softball games and ran concession stands if I was needed

3. What are the names of some of your supervisors and co-workers?

During my time at Indian Hills, I had 2 supervisors – Kelly Conrad and Terry Carlson (Directors of Athletics). I loved working for/with each of these two men. I was given so many more responsibilities because of their trust in me. All of the coaches were also my supervisors, and I had some of the best! Terry Carroll (basketball), Brad Stracke (golf), Terry Carlson (volleyball), and Jeff Kelley (softball) were all veteran coaches who knew their sports, knew how to recruit, and knew how to treat and care for student-athletes…and their secretary. Thank you all for a wonderful experience!

4. Identify or describe some unique or funny (printable) stories that occurred during your time at Indian Hills.

When I started at Indian Hills, there were 5 sports and by the time I left we had 9 sports! During my time there, we won 3 NJCAA Championships in basketball back-to-back-to-back. We had huge crowds at games – standing room only. What fun! The student-athletes are the reason we enjoyed ourselves so much. Great kids! National Tournament appearances in all of the 5 sports were definite highlights.

5. What are some good memories that you have of working at the college?

My favorite memories are of the students themselves, mainly. Our coaches recruited top athletes who were also mostly good citizens. I am still in touch with many of them on Facebook. I still remember how scared Terry Black looked when he was introduced at a basketball event! Now Terry is so comfortable around all of us. I loved going to all of the games…games are so much fun when you know the athletes! Softball, basketball, volleyball – loved attending as many as I could! I also got to work the Regional Golf Tourneys and getting to know the golfers. Some of my favorite athletes were those from other countries – CJ & Austin, Javier, Che, Irina, Leysa, Kenji, just to name a few! Plus I was able to get to know the baseball players when they came to the Ottumwa campus to watch basketball games. I could write a book about my experiences with these young men and women!

6. What are your hopes for the future for Indian Hills?

I hope Indian Hills continues to be a school where the student is the center of everything. I also hope that IHCC can return to national prominence in all of the sports. During my time at Indian Hills, the community of Ottumwa seemed so proud of our accomplishments both on and off the court/field.

7. What other special memories of IHCC do you have to share with others?

I absolutely loved working at Indian Hills and I will continue to be a Friend of IHCC!